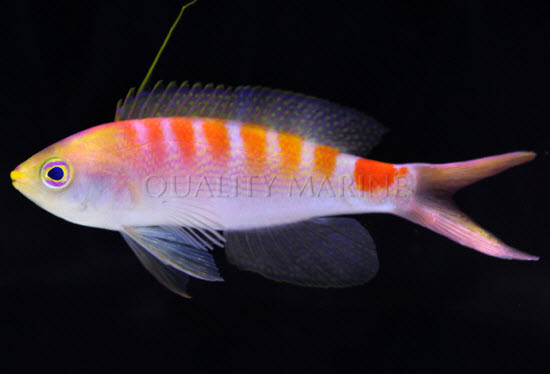 Fish collectors in New Caledonia has found a species of Anthias previously unknown in the fish keeping hobby. The species has not been described scientifically and is thus without any scientific name. The collectors, working for marine fish wholesale importer Quality Marine, has dubbed the fish New Caledoina Sunrise Anthias as it is adorned with red-orange bars and hues of yellow and pink. Credit for first collecting this species goes to Antoine Teitelbaum, and credit for first seeing this species goes to Tony Nahacky.

“When first received by QM, we were unable to conclusively identify them as any of the known species,” Quality Marine explains in an official statement posted on their website. “Antoine and Tony reached out to a number of ichthyologists, some of whom have confirmed our suspicion that they are indeed a new species and are in the process of describing it for the scientific community.” 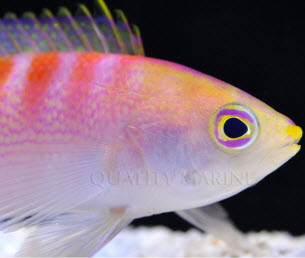 A cose up of the Caledonia Sunrise Anthias.

At Quality Marine, the collected New Caledonia Sunrise Anthias are currently being kept in two large schools. Dominant males and females can engage in some semi-violent behavior, but aside from this the school is peaceful.

“As a species, they seem to be less aggressive than many of the other Anthias this size. Because of our success in larger groups, they will likely be held like this in the future, and should be held in at least small groups (pairs, harems, etc) in the store display and home aquariums,” is the official advice provided by Quality Marine at this point.

As soon as the fish had acclimated, they started eating Nutramar OVA. After a day or so, they would also accept other meaty foods. They are now kept in on a diet of Nutramar OVA, enriched brine shrimp, Gamma mysis, krill, chopped prawn and other finely chopped meaty foods.

Although the New Caledonia Sunrise Anthias has not be scientifically named yet, it can be tentatively placed in the genus Pseudoanthias. That would make it a close relative of species such as Sea Goldie (Pseudanthias squamipinnis), Bicolor Anthias (Bicolor anthias), Tiger Anthias ( Pseudanthias lori) and Two-spot Basslet (Pseudanthias bimaculatus).

The visual similarity between the New Caledonia Sunrise Anthias and other slender deep-water dwelling Pseudoanthias from the Pacific Ocean is easy to notice.

The New Caledonia Sunrise Anthias sports red vertical bars on the back, in a patter somewhat similar to the one displayed by Tiger Anthias ( Pseudanthias lori). The bars of the New Caledonia Sunrise Anthias are very wide and pronounced, and they reach halfway down the flank of the body. There is also a bright red saddle present at the base of the tail fin. Male specimens are normally more brilliantly colored than females, and males have a dorsal spine that proceeds far beyond the dorsal fin.

Quality Marine will release the New Caledonia Sunrise Anthias on the aquarium market in the coming weeks. They do not sell directly to consumers, so fish keepers interested in keeping Sunrise Anthias need to contact marine fish stores and ask them to procure the fish for them.