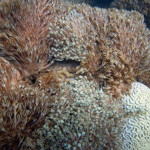 Thriving populations of Indo-Pacific Xenia has been found on reefs in Venezuela. Xenia corals are very quick growing and might pose as serious treat to the native reefs and the species living on them. END_OF_DOCUMENT_TOKEN_TO_BE_REPLACED 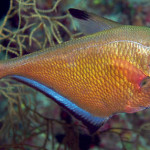 Yellow eye sweeper, Pempheris flavicycla is a newly described species that would be perfect for the aquarium trade. The species originates from the Indian Ocean and Red Sea. It is a rather colorful species that was earlier believed to be a subspecies of P. vanicolensis known as P. vanicolensis Cuvier.

There are two different subspecies of this species.

The yellow eye sweeper, Pempheris flavicycla has exactly as the name suggest brightly yellow eyes. The body is a varm orange almost golden color that is contrasted by a blue line thar runs on the bottom of the body. The top of the body can sometimes seems to have an almost green hue. A picture is however worth a thousand words so just look at the picture above to see the fish. The picture depicts P.  flavicycla marisrubri

It is a shooling species that could add color to any tank if they can be responsibly collected in large enough numbers or if they can be bred in captivity. There is as far as we know no reports of any sweeper species being bred in captivity. If you know of any breedings please post a comment below with any info you might have. This means that we atleast in the short run likely will have to rely on wild caught specimens. The species is found in shallow water ( Less than 15 m / 45 ft) which should make collecting this species easy if they exist in large enough numbers and if there is a demand for the species in the hobby. Sweepers are however a group of good looking, but by they trade often overlooked fish species. This is sad since there are several gems among the sweepers. 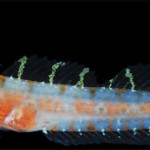 A new species of Deep water blenny has been described. The new Species was collected from depths of between 157 and 167 m (just under 500 ft) in the vecinity of Curaco (12°05.069’N, 68°53.886’W, ). The species was as you might already have guessed collected by the, by now legendary, Curasub. The new species is living in the same environment as the Sabre Fin goby, Antilligobius nikkiae that was described in 2012.

The Curasub has made it possible to collect live intact specimens of these species that you until resently only could catch and bring to surface dead from the pressure change. This new species was caught by accident while targeting other specimens.
Haptoclinus dropi as described by Carole C. Baldwin at the Department of Vertebrate Zoology, National Museum of Natural History, Smithsonian Institution, Washington DC and D. Ross Robertson of the Smithsonian Tropical Research Institute, Balboa, Republic of Panamá.

The New species is a small blenny with the holotype specimen being only 66mm long (2,5 inch)

The new species, Haptoclinus dropi is just one of many new teleost species that has been discover in deep water sampling and there is several more waiting to be discribed.

A new Haptoclinus blenny (Teleostei, Labrisomidae) from deep reefs off Curaçao, southern Caribbean, with comments on relationships of the genus 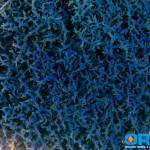 I am a big fan of Macro algae and would really want to setup a large planted marine setup one day. I find macro algae to be worthy of a lot more attention than they get today and that they often are nothing short of stunning. This is the reason I get happy every time I see a new macro algae becomming readily available on the Market. I am very happy to introduce the new Blue Hypnea that ORA recently made available to their retailers. It is a completely stunning algae that can stand its ground against any coral and that diserves to be given a central place in any aquarium rather than just being grown in algae scrubber. It can make a completely breathtaking center piece for any nano tank that has been planned around this blue beauty.

They prefer a nutrient rich water with plenty of free Iodine in the water. Regular use of Iodine supplements are recommended if you want to grow this and other Hypnea species

If you want to rknow more about how to care for blue hypnea and other Macro Algae i recommend that you visit our page about planted marine aquarium. 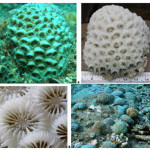 A new species of moon brain coral have been described by Yuri Latypov. The new species is called Favia camranensis and it might already have made it into the aquarium trade with other moon corals. It is also possible that the species is present in Aquaculture coral farms.

The species was discovered in Vietnam at Hon Nai Reef in Cam Ranh Bay. The colonies seems to aggregate and live in monospecific aggregations of five to twenty colonies. This species have a larger distance between the corallites than any other Favia species. Each corallite grows 2 millimeter above the last one. The corallites almost looks like shingles.

The new species has been found living on stony substrates in shallow waters at between three and six meters (10 to 20ft) depth. It usually grows in areas where you can find other Favia and Platygyra species.

Do you have an unidentified Favia in your tank and would like to know if you have a Favia camranensis. Use the pictures to see their distinctive corallite pattern. The species could have come through shipments at any time but the chance of you having a Favia camranensis is larger if you purchased a Flavia from vietnam imported during the last two years. There has been a lot more aquacultured Flavia moon corals exported from this area during that period than ever before. 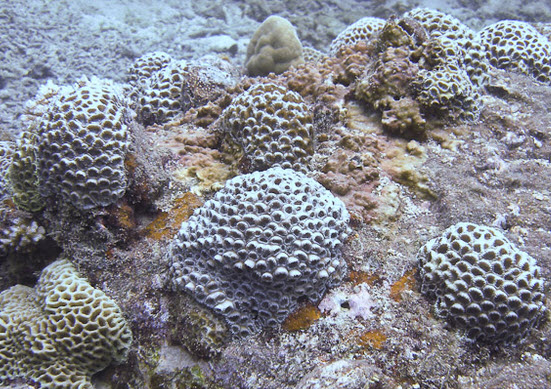 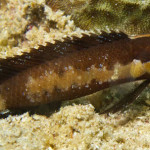 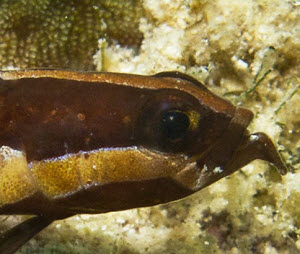 A new stunning little basslet species have been described. Acanthoplesiops cappuccino or the Cappuccino basslet. This small species was discovered in the Red Sea and was described by Anthony Gill et. al. The name was chosen due to its brown coloration with lighter coffee colored spots. The tail fin have a bright yellow edge. If you look at the picture above you will see that this species is much prettier than the description make it sound like. It is not a small brown boring fish but rather a small coffee colored gem.

The species has been described from a single holotype specimen. This specimen was collected near Jeddah, Saudi Arabia,

There isn’t enough known about this species yet to predict the probability of this fish making it into the aquarium trade. If they are present in large enough numbers I predict that collectors in the Red Sea will collect them at least occasional if there is a demand for them. I for one really hope to see this unique looking little fish in the trade on day. 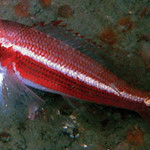 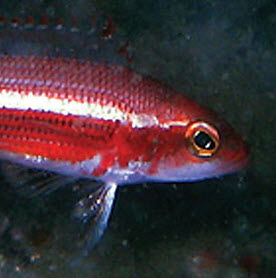 A new species of dwarf Basslet, Serranus aliceae, has been described. Serranus aliceae is a small deepwater basslet with a nearly all red, crimson coloration. The color is highlighted by a brilliant red horizontal band that runs along the body. This band is usually rather wide. The species seems to be able to grow to about 2.5 inches, 7 cm in length. The species have been found on depths between 30m (100ft), and 70m (230ft). It is possible they can be found even deeper down.

Reefbuilders have suggested the common name “cardinal basslet” for this species. I support this name and think it is suitable for the species. It is however not sure that a common name is required since it is unlikely that this species will ever enter the aquarium trade. The species was discovered on subtropical Brazilian reefs and Brazil has banned the exports of all endemic marine fish species. 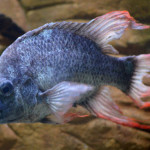 Time for a feel good story. Earlier this year the Zoological Society of London thought they had the  two of the last 3 Mangarahara Cichlid , Ptychochromis insolitus in the world. The last fish was in Berlin. The problem was that all 3 fish were males. In a bid to save the species they sent a message to aquarists around the world to see if anyone had a female that could be used to save the species.

The result was better than they could ever have expected. A Malagagasy businessman contacted Zoological Society of London and told them about a small river tributary in madagascar that he knew of where the species was still living and perhaps even breeding.

The Zoological Society of London sent out a an expedition that was able to confirm the information and found a living  population. They collected a handful (18) of Mangarahara Cichlids and brought them back to a private aquaculture facility to be a part of a breeding program to help save this endangered species. A species that seemed doomed to disappear now have a new lease on life. 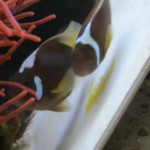 ORA have announced that they will bring White Bonnet Clownfish to the market during 2014. the White Bonnet Clownfish is a hybrid clownfish that is known to be present in the wild but that still is very rare in the trade. The fish that will be made available by ORA originates from a pair of White Bonnet clownfish (Amphirpion leucokranos, aka “White Cap”)  that was brought to the ORA Facilities from Ocean Gallery II. It was very close that the story ended there when the pair was lost in transport before the shipping company was able to relocate them. With a little luck and the help of other aquarist the fish made it to ORA alive. Since then they have grown into the pair that you can watch spawning and guarding a big nest of eggs in the video below.

There are several reasons to be excited by this announcement including;

A new species of Tridacna clam has been discovered in the Info-pacific region. The clam has yet to be scientifically described and does not yet have a valid name.

The new clam was discovered when Jude Keyse, a postgraduate student at the University of Queensland, Australia and the other co-authors of ”A Novel Widespread Cryptic Species and Phylogeographic Patterns within Several Giant Clam Species (Cardiidae: Tridacna) from the Indo-Pacific Ocean” started to DNA test clams near the Solomon Islands and at Ningaloo Reef in Western Australia. The results shows evidence of a new clam that has been hiding in plain sight. The new species is believed to be very closely related to Tridacna maxima.

Another co-author, Shane Penny, a postgraduate student at Charles Darwin University., had the following to say about the discovery “To correctly describe the new species now becomes critical as the effects of getting it wrong can be profound for fisheries, ecology and conservation,”