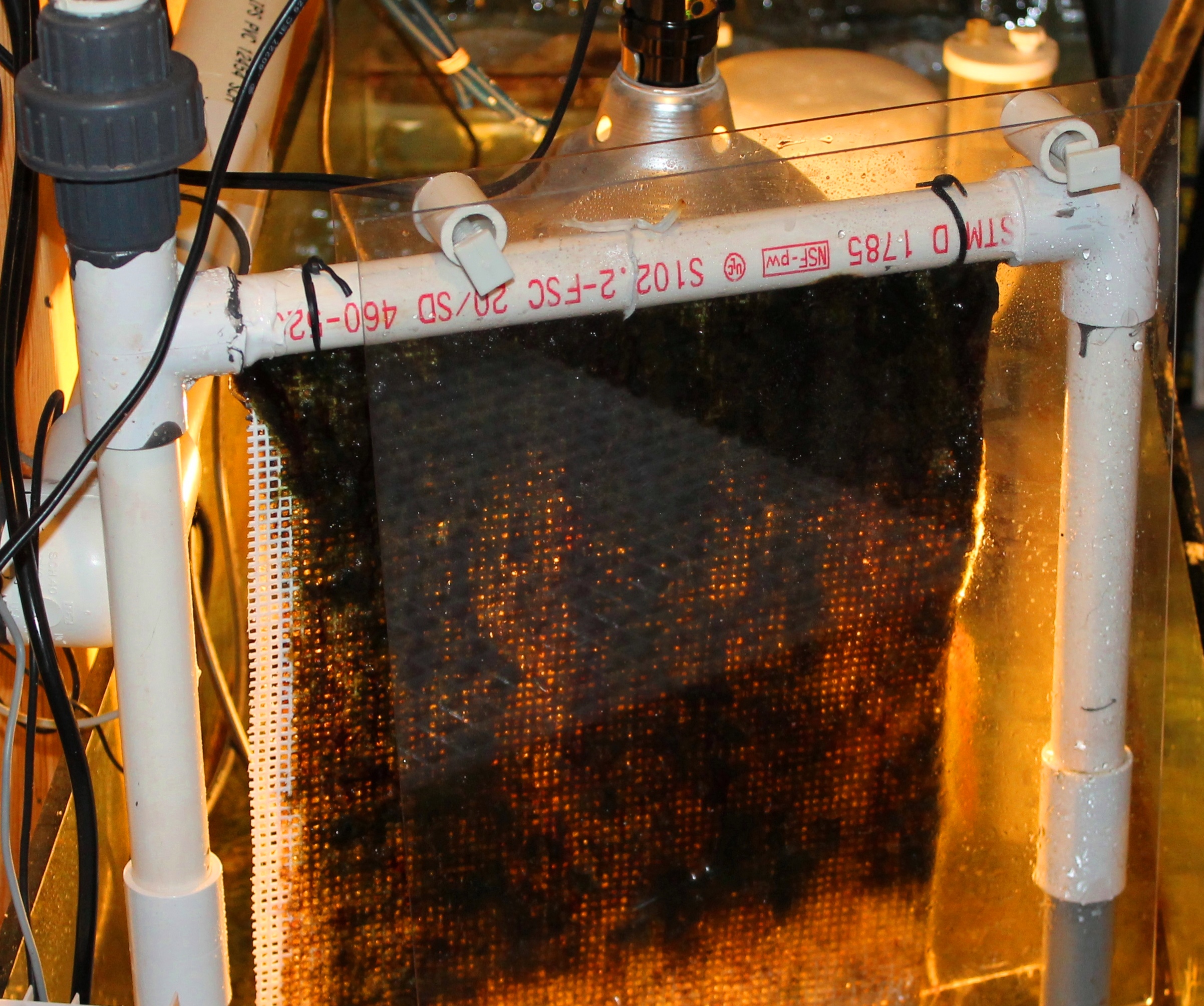 Sometimes there just is no substitute for Mother Nature.  You could make an argument that this is one of those times.   While the use of algae scrubbers as a form of filtration certainly is not a new concept in the hobby, it remains a very effective and easy approach to reducing nitrates and phosphates from your marine aquarium.   I thought I would share my approach to building and using an algae scrubber and what I have learned about some algae scrubber basics

There are different approaches and styles of algae scrubbers out there, some are better than others.  I will only be discussing the most common style of algae scrubbers, the vertical waterfall style as in my opinion that is the most efficient design as well as the one that I have the most experience with.

There are companies out there that will build and ship an algae scrubber to you.  Even if you are not handy enough to build your own scrubber, it would be worth your while to understand the key elements of an efficient scrubber so that you will know what you are purchasing.  If you have some skills with do it yourself projects, building an algae scrubber should not be a problem.  I will briefly explain the most important elements of an algae scrubber then show you how I had built a scrubber for one of my tanks.

This is one of the more critical parts of building a scrubber.  The three most important aspect of an effective scrubber are: the size of the screen, water flow, and lighting.  By designing your whole scrubber around these three elements, you will end up with an efficient and effective method of removing nutrients from your set-up.  Based on my experiences, you cannot cut corners here and expect good results.

The screen is what provides the algae with a surface area to grow on and will limit the total amount of algae you can grow.  The bigger the screen the more algae can be grown, and the more nitrates and phosphate can be consumed and removed from your set-up.  There is a simple formula that I had found for this that has allowed me to be very successful.  If your screen will have lighting on both sides, then you should have one square inch of screen for each gallon of your display tank.  If the screen will only be lit form one side, then you should have 2 square inches of screen for each gallon of your display tank.  These would be the minimum sizes for an algae scrubber screen.

The most common rule of thumb that I have found is to have a minimum of 35 GPH for each inch of screen width that you have.  If you have a screen that is 9 inches wide, then you will need 315 GPH of flow getting to the screen (9 inches X 35 GPH = 315 GHP).  Keep in mind; this is the minimum flow that you should aim for.  I would recommend a slightly higher flow as more can certainly be better as algae performs best with higher levels of flow.  More flow typically results in more nitrates and phosphates being removed from the water.

The two important aspects of lighting to keep in mind is the intensity of the lighting, and the color temperature.  Marine algae will do best with warmer color tones, ranging between 2,700K and 3,500K.  As for the intensity of the lighting, you should be planning for 0.5 to 1 watt per square inch of screen size as a minimum.  If you have a 9” X 10” screen lit from both sides, then you should have 90 watts of lighting on each side of the screen.  If you have a 9” X 20” screen lit only on one side, you would need 180 watts of lighting on that side of the screen. And as almost all of you can appreciate, the more light you put on something, the more algae it can grow, and increased growth results in more nitrates and phosphates being taken out of the water.

A Few Examples from my Algae Scrubber Build

The below is an example of screen that I had put on a scrubber for a 180 gallon tank.  I had to learn the hard way to use a properly sized screen.  I originally had a 12 X 10 inch screen but only got limited results.  Once I increased the screen size, I noticed improvements in the results.

The screen size I ended up with was 12” X 15”.  As with anything you place in your aquarium, it needs to be safe for using in your set-up.  Most people (like myself) have been able to find plastic screens that are sold to be used for knitting / needle point  which are available in most arts and crafts stores or in the arts and crafts section of most big box stores.

When you find a plastic screen to use, you will notice it has a nice smooth surface which will not provide a good enough surface for the algae to grab on to and grow. You must ensure that you rough up the screen very well.  I got the best results by using a hole saw drill bit.  I took the bit in my hand and ran it over the screen many times and from many different directions. 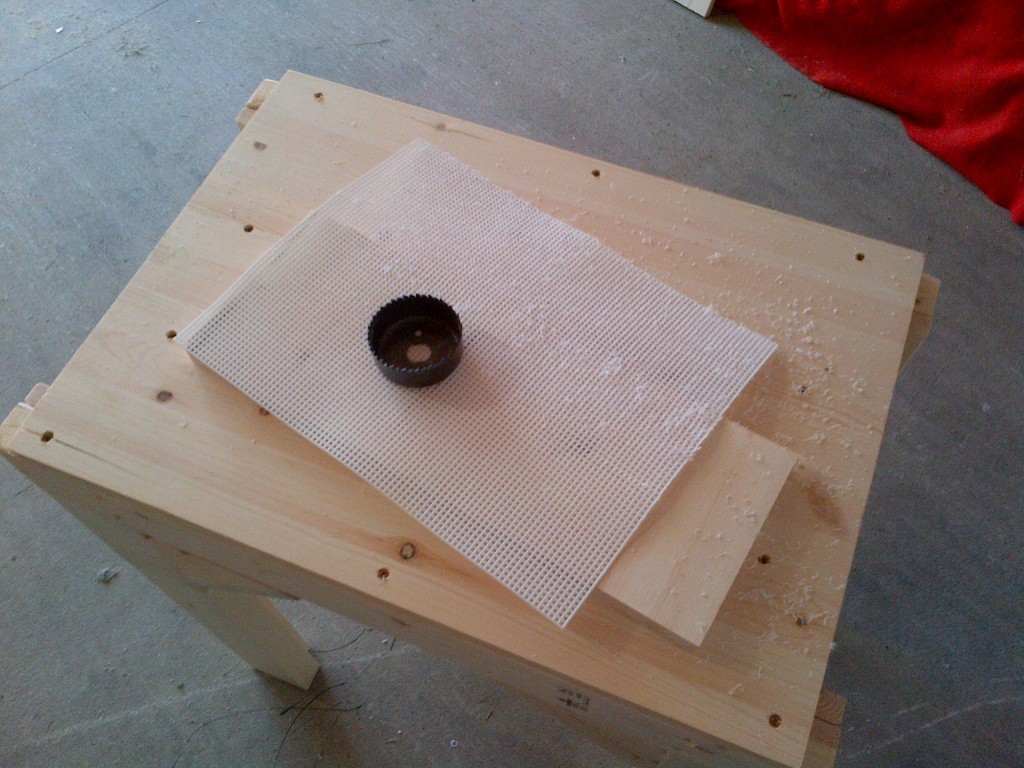 Now that my screen was ready to go, I build the scrubber frame to attach it to.  I prefer using PVC pipe for this as it is a little stronger than ABS pipe and less likely to wrap over time.  I built the frame big enough to hold the algae screen, and the lights.  Wither or not your frame will need to be strong enough to hold your lights will depend on how you would like to set up your scrubber and lighting.

One of the most difficult parts of building a scrubber can be cutting the 1/8 inch wide slit in bottom edge the PVC pipe for your screen to fit into. Many people have found it easy to use a dremel power tool with a cutting blade for this.  As I have a table saw, I just set the blade to the proper height and used the table saw to cut the slit along the bottom of the pipe (pick below).  Once that was done, I could assemble the rest of the scrubber frame.

As my screen is 12 inches while, I need to make sure the slit in the pipe was exactly 12 inches wide as well.   This also meant I will need a minimum of 420 GPH (12inches X 35gph = 420 GPH) which will work as I will get between 500 and 550 GHP flow by using one of the spare ½ inch lines from my return pump line back into the display tank 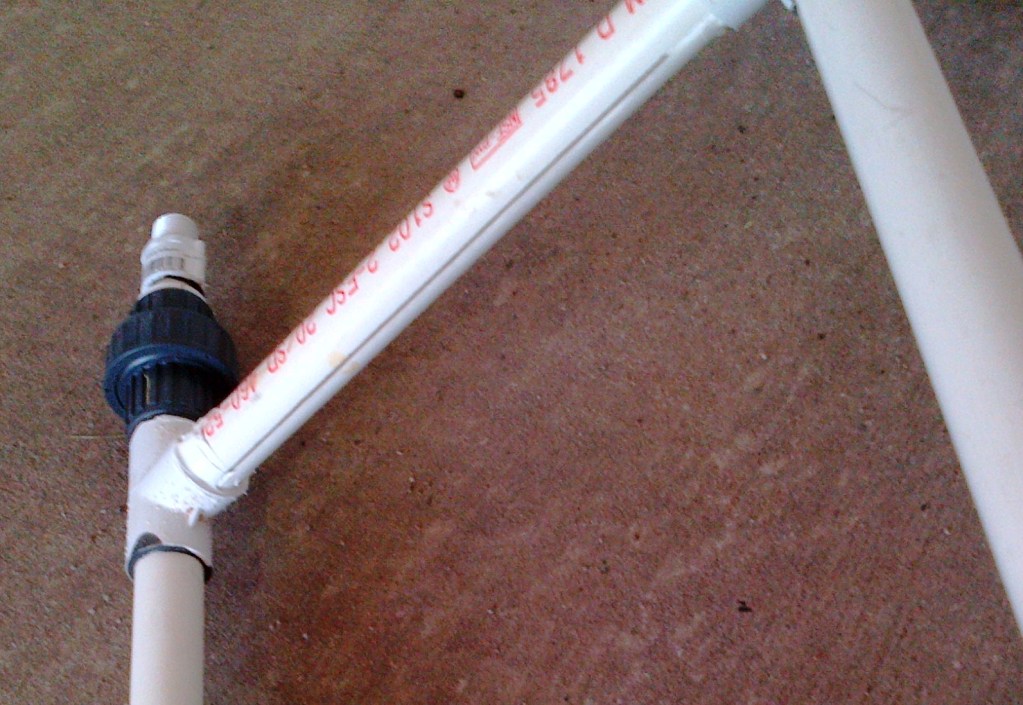 I also used two small sheets of clear acrylic to make a splash guard.  The reason for this is that I wanted to put the lighting very close the screen. Having lighting close to running water can be dangerous without anything in place to protect the light fixture from getting splashed with water.  As a special safety note here, I would also suggest you use a GFIC circuit to plug your lighting into to help prevent any electrical accidents 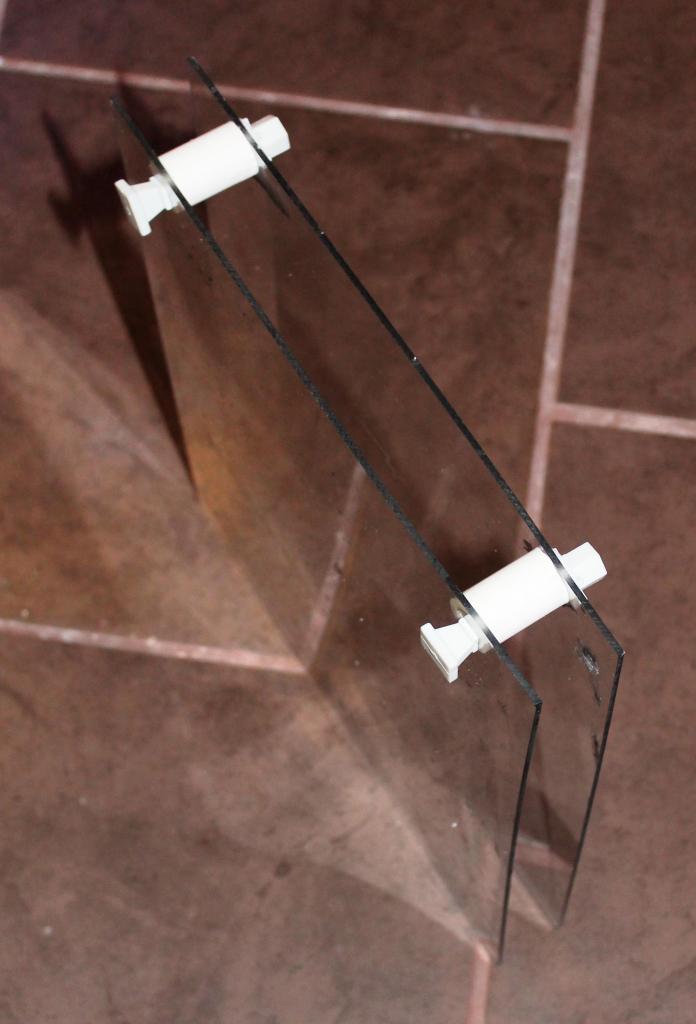 For lighting I had taken a little different approach as compared to the traditional method.  As I already had two 16” square LEDs panels, I decided to use them.  Each panel produces 240 watts of 6700K lighting.  Ideally I should have 180 watts of 2700K to 3500K.  I can compensate for the higher than ideal color temperature with the higher wattage of lighting.   Having the lighting as close to the screen as possible also helps a lot here.

Many people use CLF bulbs for lighting on their algae scrubbers as you can easily find warmer color temps closer to the ideal color temperatures that marine algae grows best on.  I have also seen a few people using red LEDs which also seem to provide good growing results in a well planned scrubber.

If I did not already have these LEDs, I would have used CFL bulbs (likely two bulbs per each side of the screen). 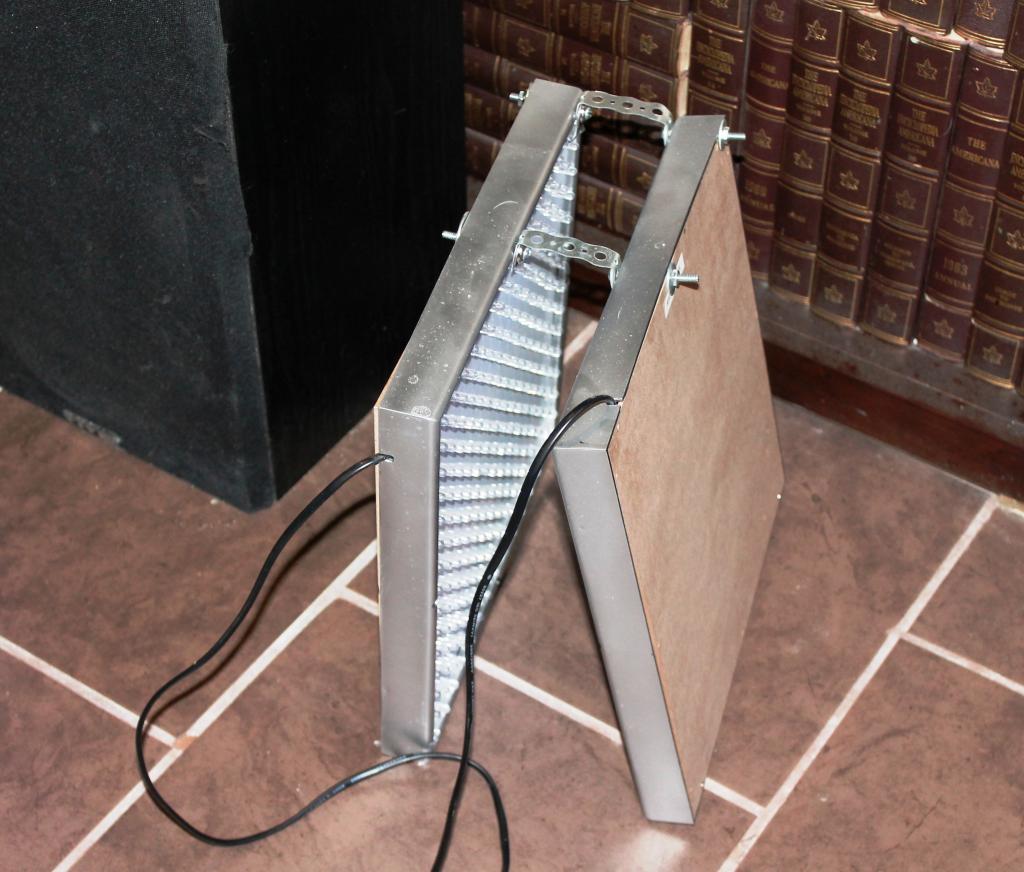 Once I had everything assembled, I put the scrubber in the sump, hooked it up to the return line, and ran it a for a few days to make sure there were no leaks and it worked as it should 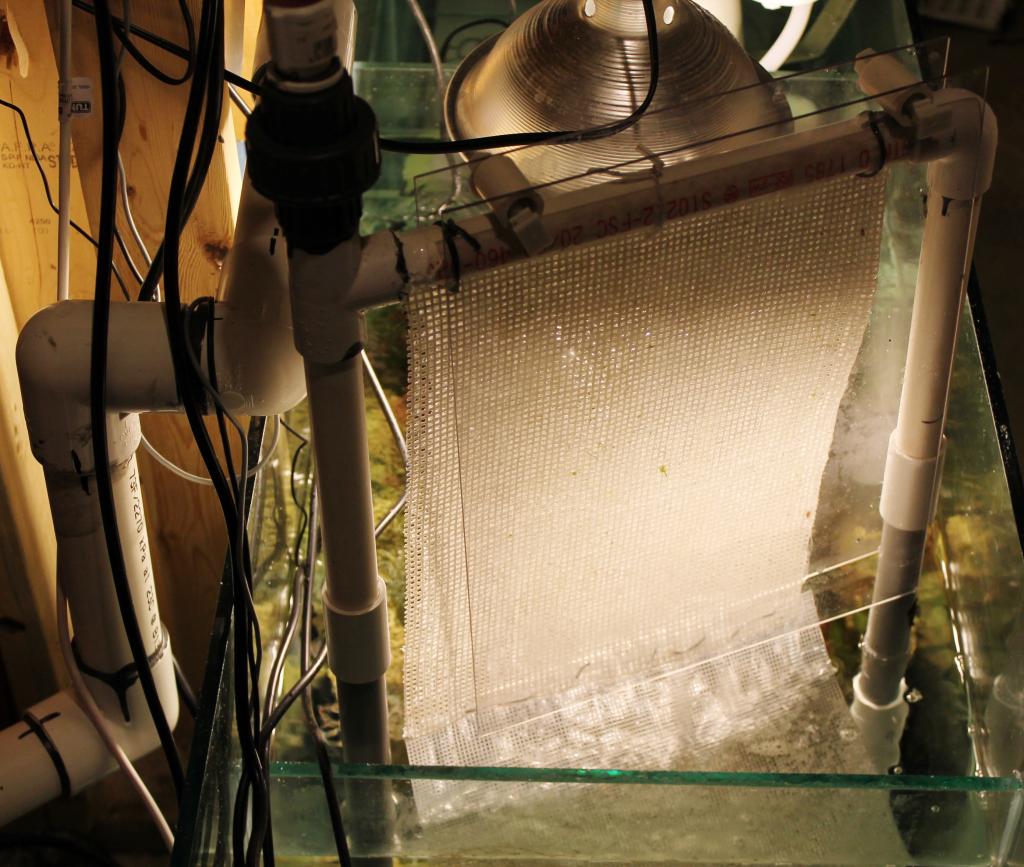 When I was happy with the leak free performance, I added the lighting to the scrubber so I could start growing algae.

After two or three weeks, I was getting some very good algae growth and I started seeing improvements in my water parameters.  I had to remove the lights in order to show the algae growth.  In the few weeks that followed after this picture was taken, the algae developed even more of a green color to it, as well as developing a texture very similar to the hair algae that you can get in your marine aquarium.

Routine Maintenance for an Algae Scrubber

As you algae develops and begins to grow, it can be very common to see it go through a few different stages of development.  It will typically start off looking like a brown or black slimy sludge like substance.  With time it will get less and less slimy in texture and start to develop more of a brown to green like color.  Once the algae has mostly green coloring to it, you are now starting to grow the more efficient nitrate and phosphate eating algae.

While the algae is still in the brown(ish) color stage, you should clean off the scrubber screen about twice a week (once every three or four days).  Once the algae is most green in color, I would suggest cleaning off one half of the scrubber screen one week, and the second half the next.  This will help to maintain constant performance from your scrubber and allow you to clean off all of the algae every two weeks.  When I clean my scrubber screen, I will take a plastic scrapper and remove the excess algae only leaving very small amounts of it in the spaces in the screen.

Also, make sure you are checking the slot in the pipe to ensure there is nothing there which could slow down the flow to the screen.

I would also like to mention that many hobbyists also use a algae scrubber on their freshwater aquariums and have reported some very good results.  I have no firsthand experience with fresh water scrubbers, but you will be able to find some good information on this topic in the references listed below

There are many different approaches to building an algae scrubber as well as scrubber designs for aquariums without sumps that you can try.  The below link and reference for this article can give you a lot more detailed information then what I have provide in this document.

If you have questions related to aquarium plumbing and how that can effect flow rates, the below link should be able to answer most of your questions

The below Algae Scrubber References are some of the best that I have found anywhere.

15 thoughts on “Some Algae Scrubber Basics”