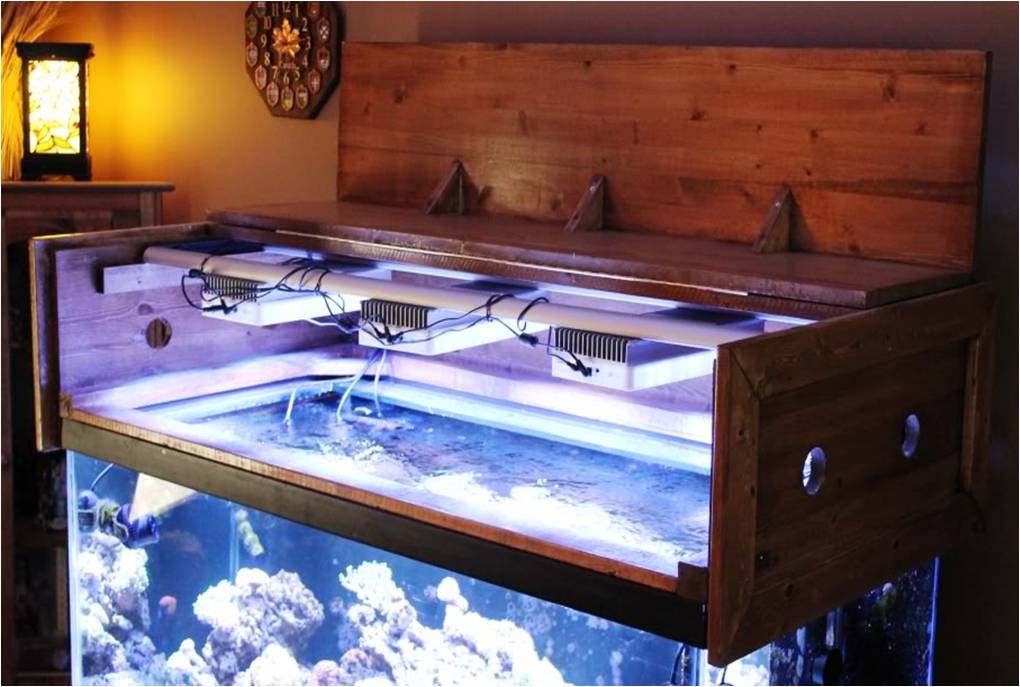 Perhaps the most important and vital piece of equipment one can buy for their reef aquarium is lighting.

Fully 95 percent of corals available in shops and online are photosynthetic. That is, they have photosynthetic bacteria in their tissues (zooxanthellae). The bacteria ‘feed’ on the light, and the sugars they produce as waste feeds the coral.

On the tropical reef it’s the sun that powers the photosynthesis of zooxanthellae. In the aquarium, it is the responsibility of the keeper to simulate the sun in their aquariums. Lighting is one of the major costs in starting a reef tank.

Here are some types.

Though I still use what I started with, as you’ll see lower in this column, there are several methods of simulating sun light.

The downside is you need electronic ballasts to power each VHO tube, and the ballasts can cost hundreds each. And you may have to wire them yourself.

There are some ballasts that can power two or more VHO tubes, but again they are quite costly. And of course the bulbs must be replaced regularly to maintain the proper intensity and spectrum.

Then came power compacts. Power Compacts product more light with much less wattage than VHO tubes. Around the same time metal halide bulbs became available in the US, and when I started in the reef hobby, top of the line was banks of actinic and daylight power compacts with halide bulbs.

The power compacts run all day in a dawn to dusk setup, and the halides come on during the height of the day, like sunlight on the natural reef. I still use PCs with halides fixtures over my reefs.

The downside is the halides, and to a lesser extent, the power compacts, produce heat, and coupled with heaters, can overheat a tank. Exhaust fans built in and venting in better fixtures can help dissipating that heat. But such high-end fixtures are costly. Raising the fixture some inches can also help with the heat.

And like other fixtures, one must replace the bulbs regularly, which can be quite costly, since top-quality halide bulbs are expensive. Power Compacts, though they maintain their spectrum and intensity longer, one needs a quantum (PAR) light meter to check the spectrum of each to know which bulbs need to be replaced.

Later T5 lighting came to the fore, and is still popular in some parts of the world.

The ‘T’ rating refers to the inside diameter of the tubes. VHO tubes were T8 size, the same as the original florescent tubes. T5s are slimmer and considerably brighter than T8s, thus are more suited to reef lighting. The much lower costs per bulb of T5s makes them an attractive option for budget-concious reef keepers.

T5’s run much cooler than halide-based lighting, so is rarely a problem in overheating a marine aquarium.

However, one needs several T5 tubes for sufficient reef lighting, and that can become costly. Though T5s last longer, they will eventually need replacement, and having six or more tubes to replace regularly can become a financial burden. As above, a quantum (PAR) light meter can indicate which tube or tubes needing replacement.

Light Emitting Diodes (LEDs) are diodes (electronic components that let electricity pass in only one direction) that emit visible light when electricity is applied, a little bit like a light bulb but only brighter. By definition they are not bulbs, even though old guys like me keep calling them bulbs out of habit 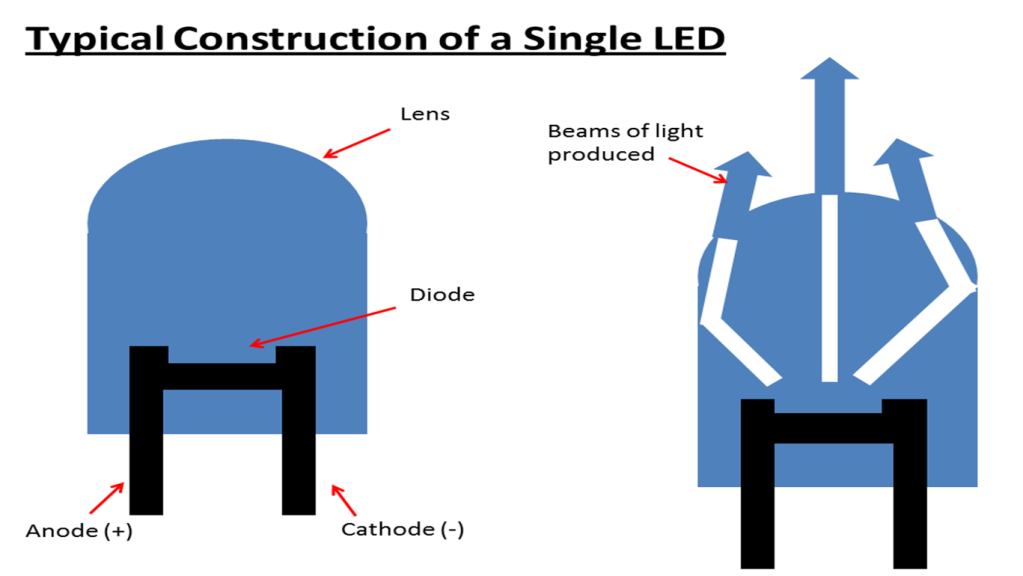 LEDs are still a fairly new technology. Early in the 19th century, a British engineer named H. J. Round working for Marconi was undertaking some experiments using crystal detectors. This work (along with others) led to the first working LED. It was invented by Nick Holonyak, Jr., in 1962 while working for General Electric. This new technology was slow to find a new market. The first LEDs became commercially available in late 1960s, and only came in red. They were commonly used as replacements for incandescent indicators, and in some displays found in equipment such as laboratory and electronics test equipment as one example. These red LEDs were bright enough only for use as indicators, as the light output was not enough to illuminate an area. Other colors became widely available later, and also started to appear in appliances and equipment. As the LED materials technology became more and more advanced, the light output was increased, and LEDs became bright enough to be used for illumination. Using LEDs for illumination only started to become really popular in a lot of different application around the early 1990s.
The following is some very basic information about LED lighting. It is based on my short experience using LEDs on one of my reef tanks, and the researching I did before getting my LEDs. I had found there are three areas you should focus on when figuring out which LED light fixture would be best for your tank. These areas are: the quality of the LEDs used (and wattage), the quality of the lenses used, and the type of controller. Keep in mind, this is really aimed towards LEDs used on a reef tank

Quality and wattage of the LED used:
Even though it seems like there are more LED manufacturers and suppliers out there than you can shake a stick at, it may come as a surprise there are only a handful of high-quality LED manufacturers. When it comes to the lighting for your tank, don’t cheap out and pick lower quality LEDs. And just to be clear, I am referring to the company that makes LEDs which may NOT be the same company that makes the fixture.
There are a few different things to look for when trying to determine if the company that made the LEDs make a good quality product. This can include (but not limited to)
A) The length of time the lighting company has been in business
B) Lighting company’s that are willing to show an estimated drop in performance across the usable life span of their products
C) Product reviews or customer reviews found on a distributor’s website.
D) Product referral from people you know and /or personally seeing the LEDs in use.

I have always had great luck with the referral and visual inspection approach, combined with a lot of research.

In addition to the quality, the wattage of the LEDs is also important. The most common range LEDs come in is from 1 to 3 watts. I would suggest getting the 3 watt LEDs. In my opinion, there is a very big difference in both the amount and quality of light with the 3 watt LEDs as compared to 1 or 2 watt LEDs. Cheaper or lower-priced LED fixtures will often have 1 or 2 watt LEDs while higher priced ones will typically have 3 watt LEDs (assuming the manufacture has not under or over powered them).

Another factor that can Influence the performance of a good quality LED is the drivers/circuitry that is used to provide power the LEDs (separate from the controller). This aspect of a fixture is what ensures the proper amount of electricity reaches the LEDs and this is done consistently to each LED. As this can differ vastly between manufactures I would only recommend that you take your time to find these types of details about your fixture. Some of the warning signs to look for could include 3 watts of power being applied to a 1 watt LED (just as one possible example).

Quality of the lenses
There are some similarities between LED lighting and your typical Fluorescent or incandescent bulbs. In order to maximize the light produced we need to direct or focus the usable light to a certain area. As an example, you can take a regular light bulb and place it on the ceiling in the middle of a room. The light will go everywhere including the ceiling. Not the most efficient use of energy. But when we put the light bulb in a pot-light fixture that reflects and directs that light were we want it, we now have more brightly lit up area and less wasted light.

LED lighting should also be focused to maximize its use, but not through the use of reflectors. As LEDs already produce a somewhat focused light they do not require a reflector. The below diagram of the red LED displays a example of the statement I just made. LEDs can become even more efficient when used with lenses to direct and focus the usable light produced in order to make better use of the light.

Below is an illustration on how the lenses focus the light. The lenses are usually measure by the angle of light produced. It is not to scale, only an illustration to give you the general idea. 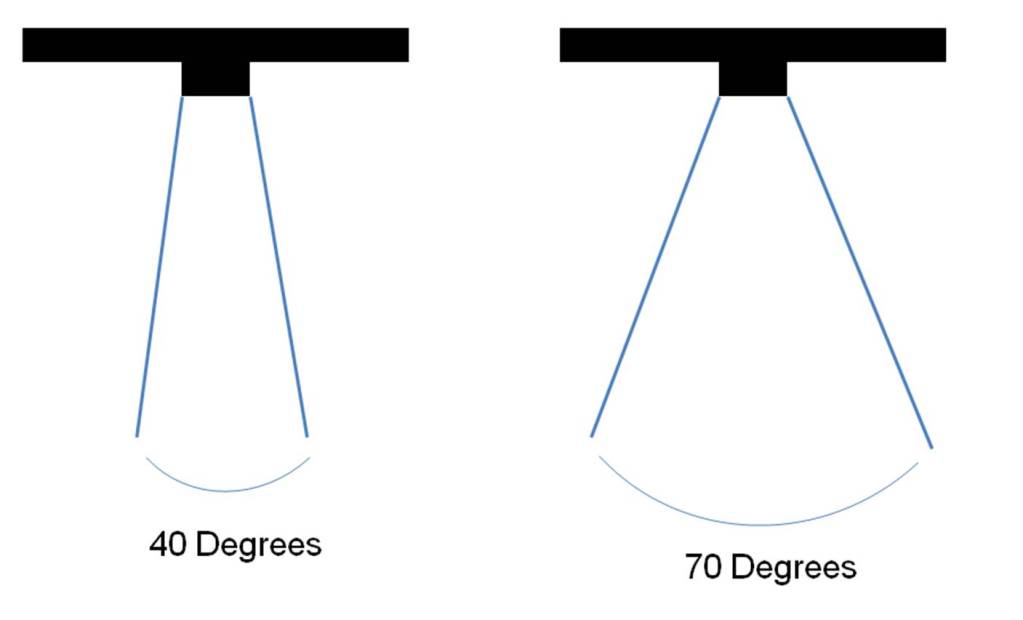 The better quality fixtures (IMO) use a combination of different lenses to create a more even distribution of light across your tank and avoid creating any circles of light on the bottom of the tank. I would also recommend a LED that also uses a very short reflector / reflector cavity as well.

When you put the above two factors together, you should be able to to get a good understanding of the quality of light a fixture is capable of producing. Most LED fixture manufactures will also list their test results for their fixtures either on a website or in product brochures. After reading a few of these as well as seeing the fixtures in use for a few different LED fixtures, I would say most manufactures are at least somewhat accurate in how they measure their products. Below is one example from Aquatic illumination’s web site.

The last and final factor is the controller
You can get some very advanced controllers that are capable of doing things just short of making you a cup of coffee in the morning and tucking you in bed at night. I, however, will only be talking about the basic functions of the more basic controllers. The great thing about the controllers that you can get with better quality LED light fixtures is that you can usually find many different controllers that will work with your fixture, not just the one the LED manufacture sells. The basic functions that you want are: the ability to adjust the light intensity, a timer, and the ability to adjust the intensity with the timer. 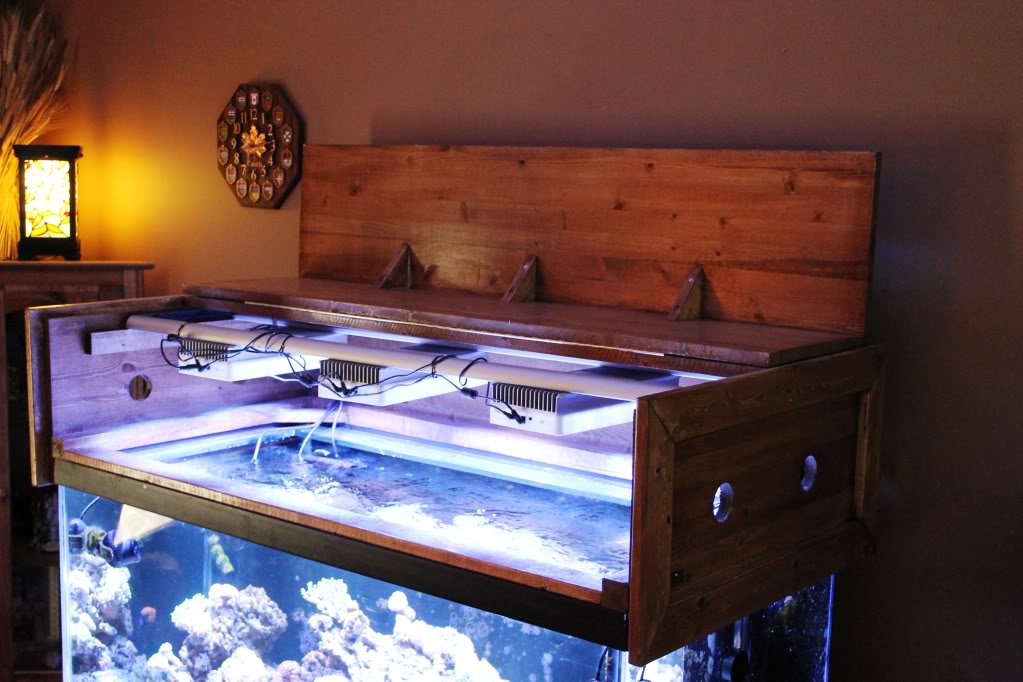 Just one last word about LEDs and heat. One of the biggest factors (that I could find at least) that will shorten the usable life of a LED is heat.

Posted in Reef, Setting up an aquarium, Uncategorized | 4 Comments